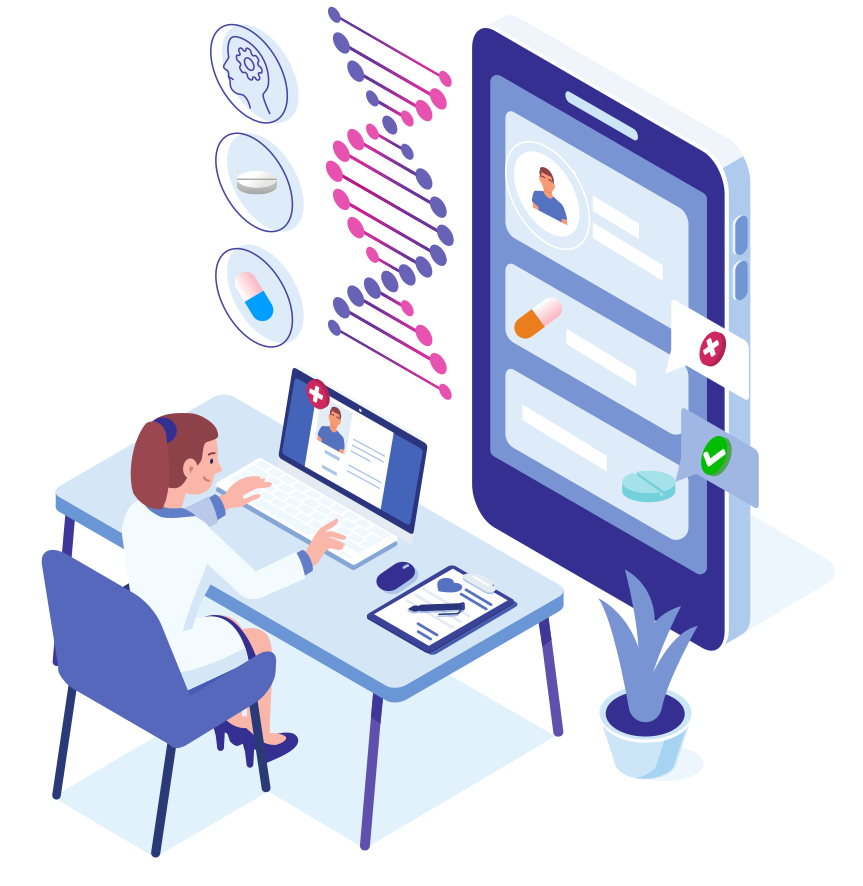 These drug recommendations can be used by your physician to prescribe the right dose of the right drug from the start.

Pharmacogenomics is compromised of two spheres: Pharmacokinetics and Pharmacodynamics.

Pharmacokinetics refers to what the body does with a medication or drug- the absorption, distribution, metabolism, and excretion of a medication. The primary implication of pharmacogenomics within pharmacokinetics, is in reference to the ‘metabolism’ portion. Many drugs undergo biotransformation into their active form via liver enzymes. Many medications are also cleared out of the body via liver enzymes i.e. anti-depressants. The pharmacogenetic testing of liver enzyme functions can help determine whether a given individual is able to activate a medication within their system, and at what speed they clear that medication. Variations in clearance determines whether a dose reduction or dose increase is needed to achieve optimal response to a medication, as well as to mitigate side-effect risk.

The majority of metabolism information has been validated by multiple studies and is considered ‘high level evidence’ information, much of it FDA approved. FDA drug labels are used to determine dosing recommendations.

Pharmacodynamics is the study of the effect of drugs on their target site in the body. It helps to determine whether the mechanism of action of the medication is compatible with a given receptor in the body and will be able to perform its function i.e. Inhibition, agonism, sensitization or desensitization. Genetic variants determine the way in which proteins work together to form parts of our appearance and function. Inter-individual variation in receptor function is prevalent- which is why different people respond variably to different medications. Pharmacodynamics can provide a glimpse of baseline function. However, there are endless mechanisms by which a medication works to improve function-which is why testing only one target gene against one medication tends to be insufficient. In addition, the body also has endless compensatory mechanisms-this highlights the importance of taking a polygenic approach to pharmacogenomics.

The Clinical Pharmacogenetic Implementation Consortium (CPIC), overseen by Stanford University and the College of American Physicians (CAP) is used to determine pharmacogenomic recommendations.

What does it mean to take a polygenic approach?

A polygenic approach to pharmacogenomics compromises an algorithm that tests and considers the impact of many variants on response to a given medication or in determining disease risk. Each gene is given a different weighing and score based on its’ level of involvement in medication response. The percentage by which a full score is met determines the degree of response to a given medication or the degree of risk for a given vulnerability.

The Rx Report™ test can help you and your physician:

Get My Test!
Use left/right arrows to navigate the slideshow or swipe left/right if using a mobile device